What The Hell is a Meme? Definition and Examples

Popularly, a meme is a type of content that spreads through social media is known as a meme, which consists of the deliberate association of elements (for example, an image and a text) in the same significant unit, resulting in the representation of an idea, concept, opinion or situation. They are often specifically called internet memes.

Memes have gained great value as a cultural manifestation, since they not only occupy a role in digital society as a form of entertainment, but also communicate values ​​and opinion matrices. They allow, therefore, to register or capture the ideas-force that move in the collective imagination.

The word meme refers to ideas, behaviors or styles that are culturally spread between people . It was coined by Richard Dawkings in his book “The Selfish Gene.” It is a derivative of the Greek “mimema” that refers to what is imitated.

This concept has been transferred to the internet to describe ideas that go viral or are massively replicated through social networks, blogs, emails … and they pass from person to person in an explosive way.

What is a meme?

The format of a meme can be a phrase, an image, a video or a more abstract concept . In general, their theme is humorous, bordering on the absurd, although sometimes they also become small philosophical pills. Therefore, we should never think that a meme is just a joke .

What characterizes memes is that they become an international phenomenon spreading the same images or jokes in all parts of the world.

Do not expect to find great works of art, Paint is the most common in this practice as well as the simplest montages with Photoshop, aesthetics do not prevail in the world of memes, but what they intend to convey.

Origin of the word meme

The word meme was created by Richard Dawkins in 1976, long before the advent of the Internet. It is a neologism that results from the adaptation between the English word gene (which means gene) and the words memory and mimesis (imitation).

Dawkins first introduced the word meme in his book The Selfish Gene , framed in the theories of cultural diffusion. It originally referred to a minimum unit of cultural information that is transmitted from subject to subject and from generation to generation, either by teaching, imitation or assimilation. In this way, memes are to culture what genes are to biology.

In their original sense, memes range from ideas to verbal expressions, gestures, theories, opinions and all kinds of values ​​and symbolic goods that compete with each other to transmit and integrate themselves as part of the consolidated culture.

The novel, viral and influential nature of Internet memes soon became a phenomenon of enormous interest to the social and communication sciences, resulting in the appropriation of the name created by Dawkins.

Origin and evolution of memes

Some place the background of the meme in the famous animated video “Dancing Baby”, “Baby Cha-Cha” or “the Oogachacka Baby”, which was widely disseminated through the world wide web and email in the second half of the decade. from 1990, to the point that she appeared in the most watched TV series of the time, Ally McBeal.

Internet memes, as we know them, appeared approximately between 2000 and 2002. Their process of evolution and viralization is closely related to the main function of the Internet: sharing information, a process that has been facilitated since the development of the main social networks: Facebook, Twitter, Instagram, Snapchat, WhatsApp and others.

Along with this, the creation of memes has multiplied thanks to the appearance of pages and applications (apps) that offer services such as meme generators, as well as databases.

The role of memes

At an elementary level, memes have the function of transmitting a message. This can be an opinion, a concept or an idea. It is not uncommon for memes to turn to humor and / or irony.

In any case, memes are an expression of the values ​​that circulate in society and compete to become hegemonic. Its success, however, depends on the recipient sharing the same cultural references as the sender of the message.

On another level, many memes collaborate in the propaganda of masked people or products. For this reason, the mechanism of the viralization of memes is often associated with viral marketing campaigns that, indirectly, position a figure or product in the market, making it a recognizable reference before or after the official launch.

According to Limor Shifman, the memes that manage to go viral are characterized by sharing the following elements:

According to the format

This type of memes uses the association of images and text. The interrelation between all these elements generates a new meaning.

They are those memes of images that associate an expressive face with some sentence or reasoning. As a rule, these faces are typified. 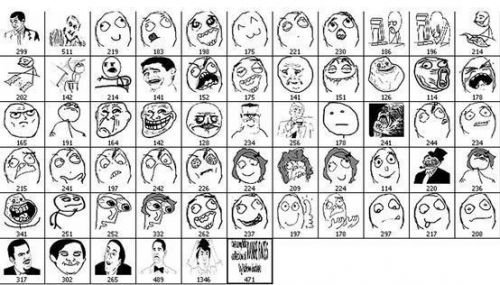 Example of icons most used in Internet Faces type memes.

Two children mine Ethereum in their home garage and earn $32,000 a month

According to a former Goldman Sachs executive, four cryptocurrencies will achieve as much success as BTC and ETH

George Soros: the repentant billionaire who considered Bitcoin a “bubble” and now invests in crypto

Join millions of others and stay up to date with the latest developments.
[mc4wp_form id="682"]
We use cookies on our website to give you the most relevant experience by remembering your preferences and repeat visits. By clicking “Accept”, you consent to the use of ALL the cookies.
Cookie settingsACCEPT
Manage consent

This website uses cookies to improve your experience while you navigate through the website. Out of these, the cookies that are categorized as necessary are stored on your browser as they are essential for the working of basic functionalities of the website. We also use third-party cookies that help us analyze and understand how you use this website. These cookies will be stored in your browser only with your consent. You also have the option to opt-out of these cookies. But opting out of some of these cookies may affect your browsing experience.
Necessary Always Enabled
Necessary cookies are absolutely essential for the website to function properly. These cookies ensure basic functionalities and security features of the website, anonymously.
Functional
Functional cookies help to perform certain functionalities like sharing the content of the website on social media platforms, collect feedbacks, and other third-party features.
Performance
Performance cookies are used to understand and analyze the key performance indexes of the website which helps in delivering a better user experience for the visitors.
Analytics
Analytical cookies are used to understand how visitors interact with the website. These cookies help provide information on metrics the number of visitors, bounce rate, traffic source, etc.
Advertisement
Advertisement cookies are used to provide visitors with relevant ads and marketing campaigns. These cookies track visitors across websites and collect information to provide customized ads.
Others
Other uncategorized cookies are those that are being analyzed and have not been classified into a category as yet.
SAVE & ACCEPT